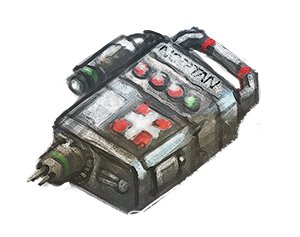 Of the many industrial and scientific improvements that happened leading up to the Big Mistake, nothing is so universally acclaimed, or just stupidly useful, as the standardize medicine kit.

No one’s really entirely sure anymore how it works, how something so simple can heal all the various different creatures that populate Gamma Terra, but who cares, it’s a Med Pack!

Power (Consumable): Standard action. The target
spends a healing surge. Only one MedPack can be
used per target per encounter.

Special: On a natural 20, the MedPack is not expended, and can be used again, even in the same encounter (but not on the same character per encounter).

Ascendant campaigns can view previous versions of their pages, see what has changed (and who did it), and even restore old versions. It's like having a rewind button for your campaign.

We've already been saving your edits, so if you upgrade now you will have instant access to your previous versions. Plus, you get a 15-day free trial, so there's nothing to lose.

I'm sorry, but we no longer support this web browser. Please upgrade your browser or install Chrome or Firefox to enjoy the full functionality of this site.